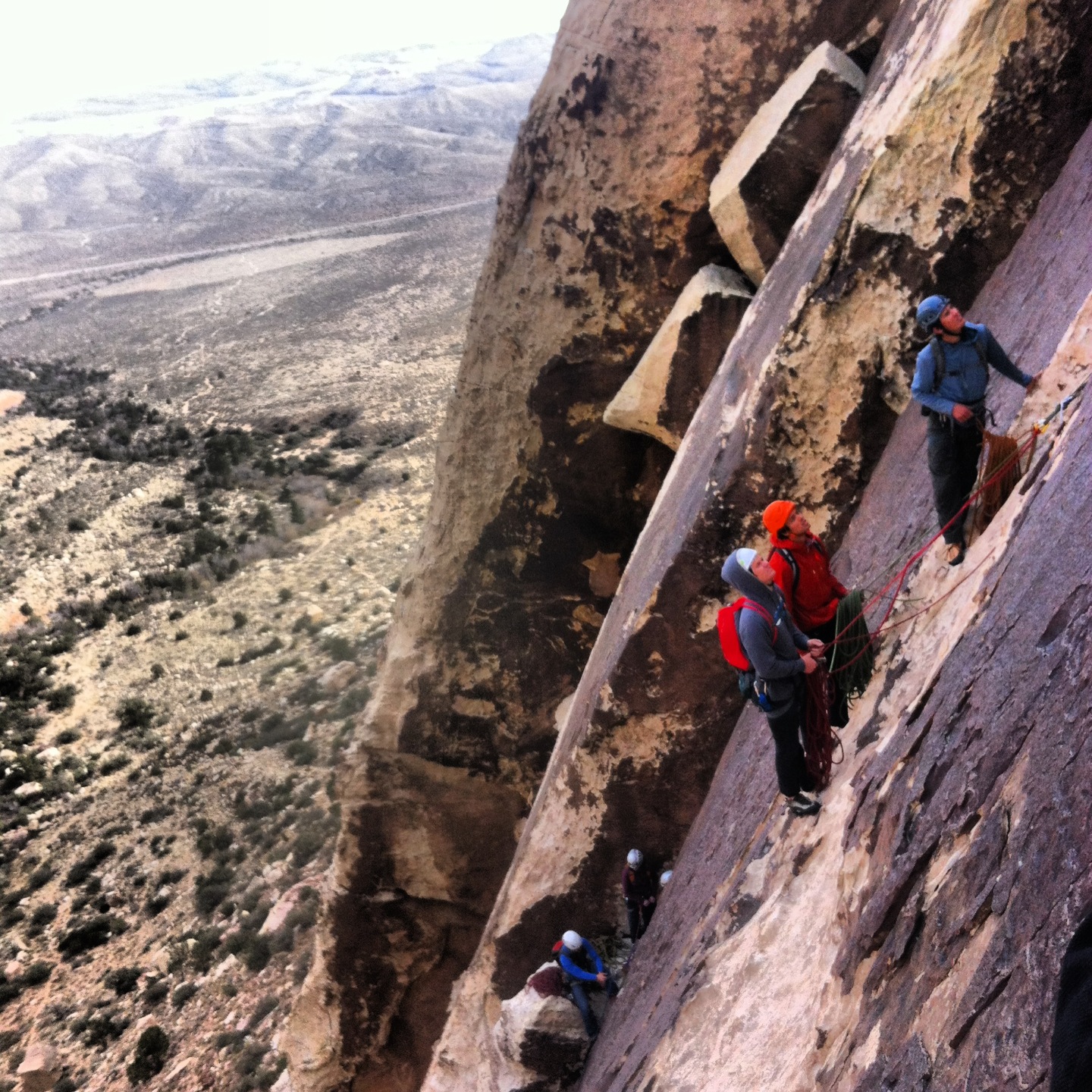 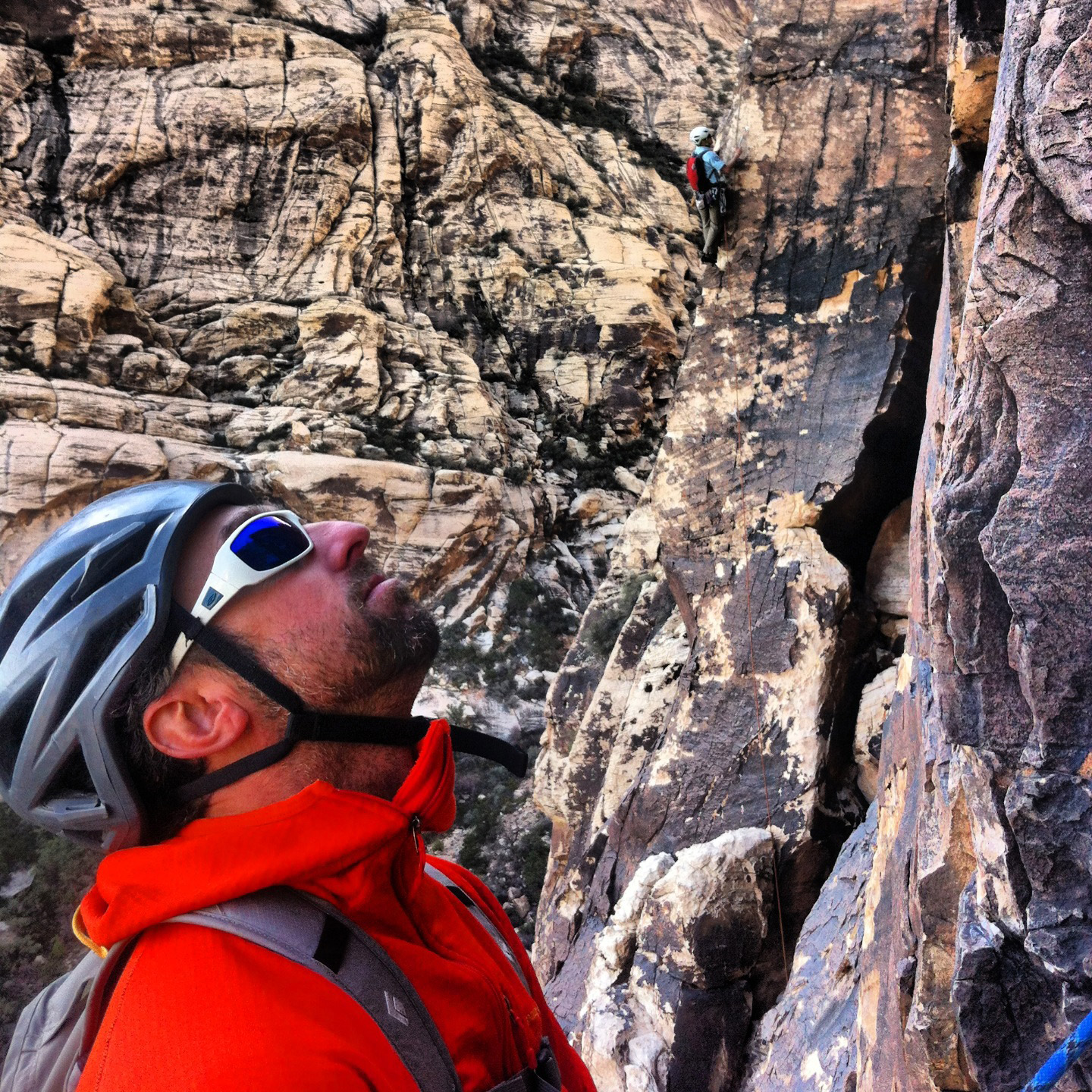 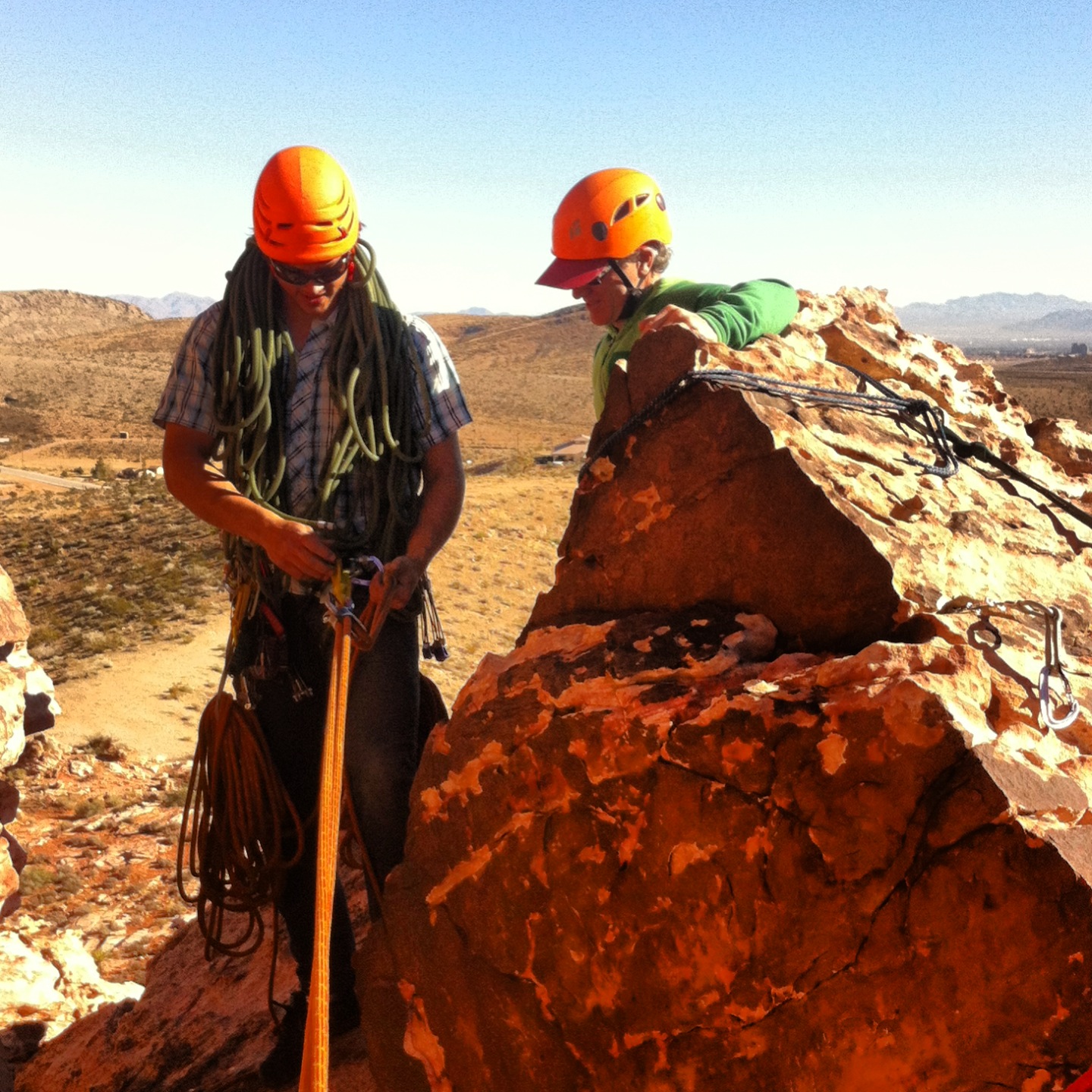 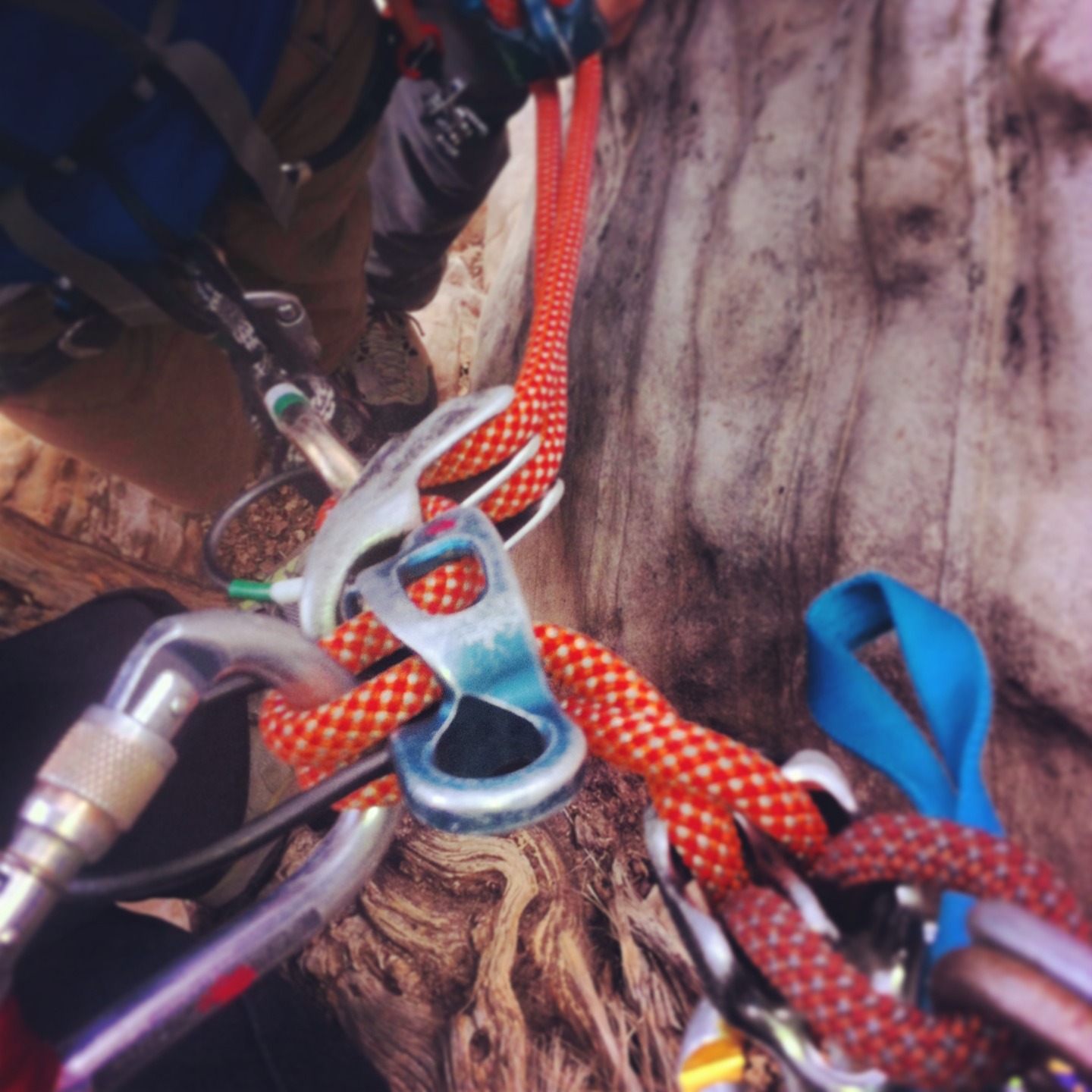 This past November I and several other RMI guides had the opportunity to further hone our guiding skills by participating in the American Mountain Guides Association (AMGA) Rock Instructor Course (RIC). I decided that after five years in the industry it would be enlightening to gain a perspective into this organization and put myself in the position of a student. The RIC is designed to create a foundation for guides looking to pursue a certification in the rock or alpine realm and is a prerequisite for many other AMGA courses. The program was set up as a contract course by RMI and was partially funded by the Eddie Bauer/First Ascent guide grant which kept the tuition costs low and excitement high. The course took place in the world renowned climbing area of Red Rocks; just outside of the world renowned capital of partying and gambling, Las Vegas, NV. Red Rocks is formed out of beautiful Aztec sandstone that was left behind by sand dunes 180 million years ago in an environment much like today’s Sahara Desert. With relatively short but, often complex, approaches and descents to long classic routes this is the ideal place to learn and play. The available climbing ranges from short sport climbs to 2500’ big wall routes, however, this course focused on guiding in class 4 terrain and traditionally protected routes to the 5.9 level. Most of us arrived at least a few days early to prepare for the course and get used to the rock; climbing Washington state granite, Bozeman ice, or glaciers on Mount Rainier doesn’t always prepare you for long lines on soft sandstone. I arrived one week early and was thoroughly psyched to leave the soggy sight of the Puget Sound for a sun soaked desert. I quickly found myself back in the rock climbing culture at the local BLM campground, with campfires and some mellow acoustics at night as well as the blow torch sound of a propane stove firing in the morning. It was early to bed and early to rise for the next few weeks to maximize the limited winter light. The sun rose at 6:30 am but left us by 4:15 pm. After 6 great days of climbing and several months of preparation, I was ready to start the course. It was a crisp Sunday morning and we were all up extra early to make sure our gear was in order and looking good. We had received a rather detailed itinerary via email and a few phone calls before the course but still were not sure exactly what to expect at the Red Springs picnic area that morning. For most of us this was our first experience with the AMGA and none of us had taken a “guide track” program before. I had heard that it was going to be serious and to go in prepared, which led me to have questions like “what will these instructors be like? And expect of us?” “Does my hair look okay?” ”How much am I really going to learn?” Upon arrival it was the classic first time meet up. Overall pretty quiet with a few light conversations, introductions, and of course a lot of sipping coffee. At 8 o’clock sharp we began and the mood eased exponentially over the day; by 2pm there were dirty jokes being thrown around. The three instructors were not out to judge or be hardcore; they were clearly there to mentor because they love guiding. The first part of the RIC was used to make sure we were all on the same page with the basics and begin to learn a few more advanced skills we would need later in the week. By the end of the second day it was becoming clear that some foul weather was in store, so we decided to get on the rock and start tugging as soon as possible. Over the next two and a half days we split into teams of four and got in well over 1000 vertical feet of climbing on a few classic routes. Our management of three ropes and four people on a hanging belay quickly went from obnoxiously poor to…….well…..not half bad. The stoke was high, and we were all excited to be learning from and climbing with some of the best guides in the business. As I was two pitches up on the four pitch “Big Bad Wolf”, I looked over my shoulder and saw huge bands of rain pummeling Las Vegas in the valley below. We made the hasty call to link the last two pitches and bring a few ropes at a time to finish the climb before the rain hit us. As the last climber was cresting the top I felt the first drop hit my forehead. We continued with a crash course in short roping off the backside. As the dust turned to mud before my eyes I couldn’t have known that the climbing portion of the course would be over. We were in the desert, right? 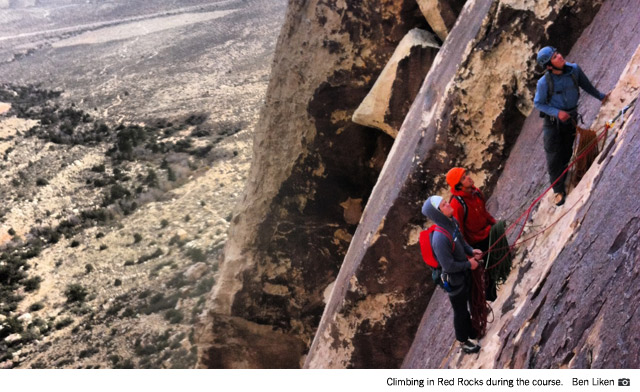 Over the next three days we practiced and perfected rescue and rope skills as the rain fell nonstop all around the pavilion we were under. It was fun to focus purely on the timed drills and creating one handed hitches as they were called out. Looking out we could see the rock getting wetter than it had been in months. The sandstone in Red Rocks is porous and thus absorbs water like a sponge. Even in the warmest months the rock needs 24-48 hours to dry after a soaking rain and we had a lot of soaking rain with cool temps and low sun. The issue with climbing on the damp rock was not going to be its slipperiness but rather the danger of holds breaking and a leader falling onto protection in that same type of rock that just broke. As the sun rose for the last three days of the course we had to turn down perfect climbing weather because of poor route conditions. I sympathized with the climbers I work with on Mount Rainier: they come from across the country after months of training, time, and money spent, only to be shut down by avalanche hazard or icy conditions on a beautiful, sunny day. All was not lost however; we were able to learn and practice new skills in the horizontal plane, on very sunny aspects, and in steep off trail terrain. We agreed that we learned just as much if not more in this manner than we would have high on the rock. 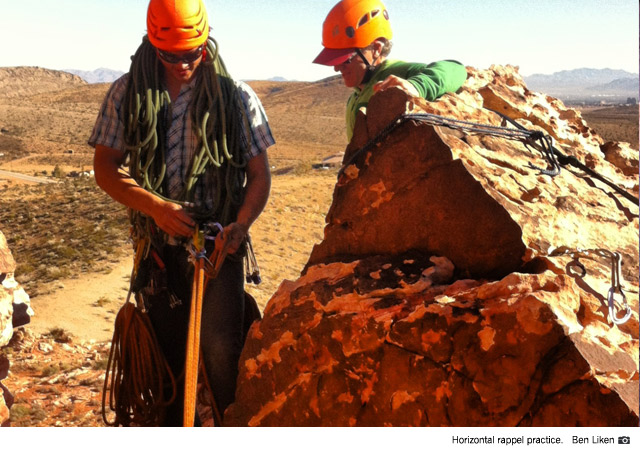 This was my first AMGA experience and it could not have been a better one. It solidified many skills that I can put to use in my current guiding and climbing. It was a great opportunity to develop myself in my profession and has opened the door for more courses and certifications. These courses and certifications are not required for guiding in the United States and many great guides are fully qualified through experience. This program and others offered by the AMGA however, get guides on the same page and forces us to be the best we can be, whether it be on Red Rocks sandstone, Mount Rainier Glaciers, or a remote peak in the Andes. Thanks to RMI, Eddie Bauer/First Ascent guide grant, and all the guides on the course for making this possible. Climb On!

Filter By:
check the Summit Registry try our Adventure Finder
Back to Top